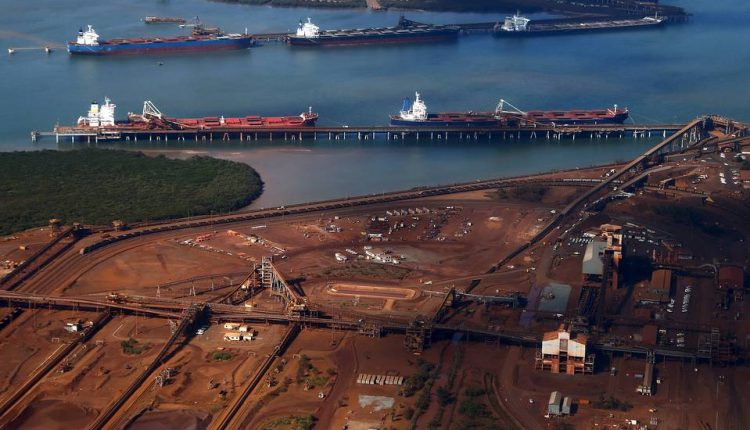 SYDNEY—Big Mining is tightening its grip on the iron-ore market.

As industry giants such as Rio Tinto PLC and BHP Billiton Ltd. dig up ever more of the steelmaking ingredient for export, the resulting supply glut has caused prices to slump. But the majors’ tactics are helping them squeeze out smaller rivals, increasing their oligopoly’s share of global trade in the ore.

The world’s four biggest iron-ore suppliers—Rio and BHP along with Brazil’s Vale SA and Australia’s Fortescue Metals Group Ltd.—accounted for 71% of the world’s iron-ore shipments in 2014, up from an average of 65% from 2009-13, according to Citi estimates. The bank now reckons that market share for the four could rise to 80% by 2018.

There is no sign the majors are ready to pull back.

BHP said Wednesday its iron-ore output rose 14% to a record 233 million metric tons in its fiscal year through June, and forecast another 6% rise in the year ahead. Rio last week said it is sticking by plans to increase its output from the key Pilbara mining region of Western Australia to 360 million tons within the next couple of years, up from around 280 million in 2014. Vale meanwhile aims to produce 450 million tons of iron ore by 2018, up by more than a third from its output in 2014.

For the big guns, it is back to the future. Before the early 2000s, low prices and big investment costs meant the iron-ore industry was dominated by a small handful of large producers. From 1980 to 2005, iron-ore exports from Australia fetched an average $30 a ton in today’s dollars, BHP says.

Now, as China’s demand growth has waned, prices have fallen back to $52 a ton, close to their lowest level for a decade. The majors’ gamble, once again, is that it is better to produce as much ore as possible even at a low price, rather than pump out less but potentially enjoy a higher selling price as the market tightens.

The majors’ operating costs are low enough for them to keep a reasonable margin on each ton they ship even with lackluster prices, thanks to their economies of scale. The majors also don’t want to cede market share to their big rivals by cutting production. Anti-cartel rules meanwhile prevent from them from using their oligopolistic position to collude to restrict supply.

But investors and analysts have become more critical. BHP reported a 35% year-over-year fall in profit from its iron-ore operations in the six months ended in December. It will report full-year results next month.

Both BHP and Rio are generating their lowest level of returns on equity since the 1980s, Citi recently estimated: each company’s shares are trading close to six-year lows.

“It is probably time for the oligopoly to start reconsidering their supply-driven approach,” said Ben Lyons, a Sydney-based portfolio manager at ATI Asset Management.

The debate reached a flash point in May, when smaller rivals, squeezed by plummeting prices, called on the Australian government to hold a parliamentary inquiry into the industry’s relentless output expansion. The government rejected the calls.

Critics of BHP and Rio Tinto included the U.S. miner Cliffs Natural Resources Inc. and Fortescue, which has itself hiked production sharply in recent years, but is grappling with a massive debt pile and higher costs than its Australian rivals.

Other big international companies are suffering. Anglo American PLC, the world’s fifth-largest diversified miner by market value, said it would write off up to $4 billion its assets this year, mostly related to its Minas-Rio iron-ore mine in Brazil in which it has invested $8.8 billion.

Both Rio and BHP say their expansions, planned years ago, are in the best interests of their shareholders. Any change would require a massive about-face from executives.

“Do we see value in us pulling back our volume with the objective of increasing the price? The answer to that is absolutely no,” Jimmy Wilson, head of BHP’s iron-ore business, said in March. “If we pull back our volume, that volume will be filled by other companies. At the end of the day, we will be penalizing, in essence, our shareholders.”

Smaller producers are expected to exit the market. Tumbling prices have already closed some private mines in China, where output costs are among the highest in the world.

“We expect other higher-cost miners to continue to shut capacity in response to low prices,” said Jefferies analyst Christopher LaFemina.

In Australia, once-thriving small producers are looking for a future elsewhere. Gindalbie Metals Ltd., for one, is bidding for a federal-government contract to handle nuclear waste on its land, while Mount Gibson Iron Ltd. is considering options for a logistics base at its mine site.

But analysts say that bigger cutbacks would be needed to spur a price rebound.

“We…do not expect that iron ore’s oligopolistic market structure will prevent iron-ore prices from falling below US$40 a ton” later this year, the Citi analysts said.