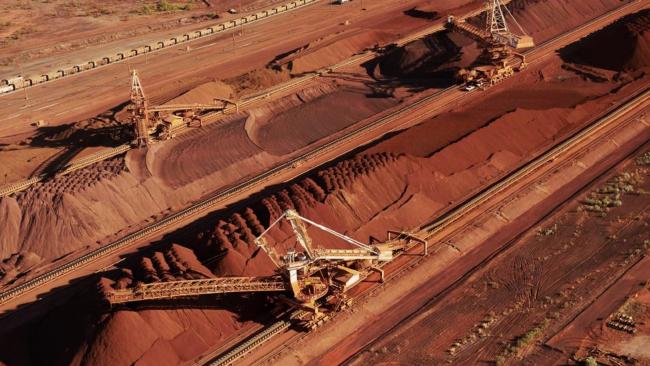 The eye-popping surge in iron ore prices that underpinned a wave of buying support for the previously unloved iron ore miners is likely to be short-lived, the industry’s senior leaders have warned.

The unprecedented 19 per cent spike in iron ore prices on Monday took the price of Australia’s most valuable export to a level not seen since June last year.

The rally came on the back of increased market expectation that Chinese policymakers will buttress economic growth with a fresh round of stimulus.

The gain represents an annual revenue boost to the Australian industry of more than $US8.25 billion ($11.1bn) — if the higher level is in fact maintained.

But iron ore executives ­cautioned against seeing the rally as anything more than an ­aberration.

Speaking on the sidelines of the Global Iron and Steel Forecast conference in Perth yesterday, BHP Billiton’s recently appointed head of Australian mineral operations, Mike Henry, said the company’s views on the long-term outlook for iron ore was unchanged in the wake of the rally.

“What we saw happen in price (on Monday) wasn’t reflective of underlying strong uptick in steel production or iron ore demand; it was based on market sentiment and market expectations around what was going to happen,” Mr Henry said.

“If the mid to long-term outlook plays out as we expect it to, you will see a flattening of the cost curve, lower prices, and high-cost tonnes will respond accordingly as they have (by leaving the ­market).”

Confidence in the outlook for iron ore has been hurt in recent years by expectations that the Chinese economy will transition away from infrastructure and construction-led growth towards consumption and services-led growth.

While the recent rally has been based on expectations that authorities would commit to large-scale investment in railways and construction — initiatives that would be particularly beneficial to iron ore — Mr Henry said he did not think the broader direction of the Chinese economy had changed.

“I’m confident to say that the Chinese economy is still transitioning. But as you transition from one point to another point, there’s always variability around the mean,” he said.

“At any given short period, you may see more or less infrastructure investment than people expected.”

Mr Henry’s thoughts were echoed by Barry Fitzgerald, chief executive of Gina Rinehart’s Roy Hill Holdings, operator of the new 45 million-tonne-a-year Roy Hill mine in the Pilbara. “I was talking to my staff last week and said I was expecting (the iron ore price) to decrease, so it was a very unexpected surprise,” he said.

“My personal view … is that the future does hold some lower points and I think it’s an aberration.”

Rather than iron ore remaining in the range of $US60 a tonne, Mr Fitzgerald said he was expecting it to fall significantly in the months ahead. “The consensus, if you look at the estimates, is that it gets down into the $US30s or $US40s; we would expect it to be somewhere around there,” he said.

Roy Hill Holdings, whose other partners include Marubeni, Posco and China Steel, began production at its namesake mine late last year.

Michael Gollschewski, managing director of Rio Tinto’s Pilbara mines, did not comment specifically on the latest iron ore rally, but he said China was continuing to move through a “transitional phase”.

“While the iron ore price is well below the unprecedented peaks of the China boom, it is hovering around the long-term average and the fundamentals for iron ore demand remain strong,” Mr Gollschewski said.

Iron producers rallied hard on Monday afternoon when futures and spot trading in China pointed to the price rebound.

They continued yesterday, with the most leveraged to a price increase — those that have struggled to break even at the lower levels — again posting strong gains. Atlas Iron rose 40 per cent to a still shell-shocked 3.1c. Gindalbie gained 5.5 per cent to 1.9c and Mount Gibson Iron gained 5 per cent to 21c.

Among the other pure iron ore producers, Fortescue succumbed to profit-takers after Monday’s spectacular 21 per cent rise, losing 29c, or 9.4 per cent, to $2.79.

ANZ’s commodities desk said Monday’s price surge appeared to be a short covering rally, supported by a combination of the recent policy measures in China’s housing market, continued moves to restructure the Chinese steel industry, and the pro-growth rhetoric coming out of the weekend’s National People’s Congress.

“For fundamentals to match this shift in sentiment, we would need to see Chinese steel demand rise by 5 per cent this year — a highly unlikely scenario,’’ it cautioned.